An initiative by the Hans-Bredow-Institut in cooperation with the Universität Hamburg and the Osgood Hall Law School of York University in Toronto for the promotion of supranational and international expertise in the legal analysis of civil and public law issues in telecommunications and media industries.

The one-year LL.M Programme in European and Transnational Media and Telecommunication law will start in October 2007 and is jointly offered by the University of Hamburg and the Osgoode Hall Law School of York University (Toronto), in co-operation with the International Center for Graduate Studies (ICGS) at the University of Hamburg. The programme is designed to meet the increasing demand for supranational and international expertise in the legal analysis of civil and public law issues in telecommunications and media industries. The programme is targeted at outstanding postgraduate students and talented young professionals, who want to gain additional qualifications. Every participant will spend two trimesters in Hamburg and one trimester in Toronto. The hands-on curriculum comprises all facets of telecommunications and media law, and also modules from related fields such as commercial and competition law and fundamentally important fields such as contract law.

The Hans-Bredow-Institut, which initiated the programme, functions as an official partner of the programme and is responsible for the development and design of the curriculum. It already managed to recruit renowned experts and practitioners from internationally operating law firms and research centres.

During the conception stage from June 2005 until June 2006, the institute received initial funding from the Media Foundation Hamburg (Medienstiftung Hamburg). Once the programme began, it would be funded through the tuition fees paid by participants.

However, the programme came to an end in 2007 due the unsatisfactory number of applicants in the two preceding years. At present, the programme is being completely revised. 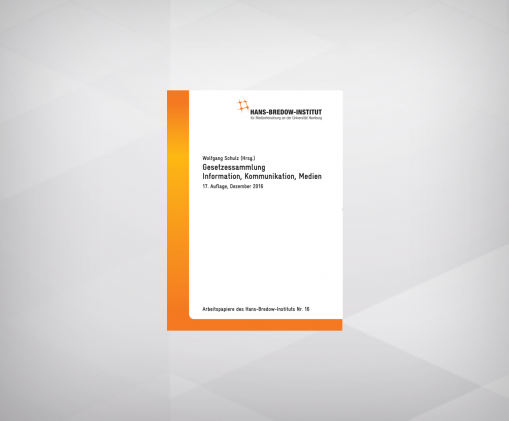